We had a look earlier at the music of last month, well now it’s time to look at what I have been watching in June 2017 with this fresh Flix of the Month blog, let’s go: 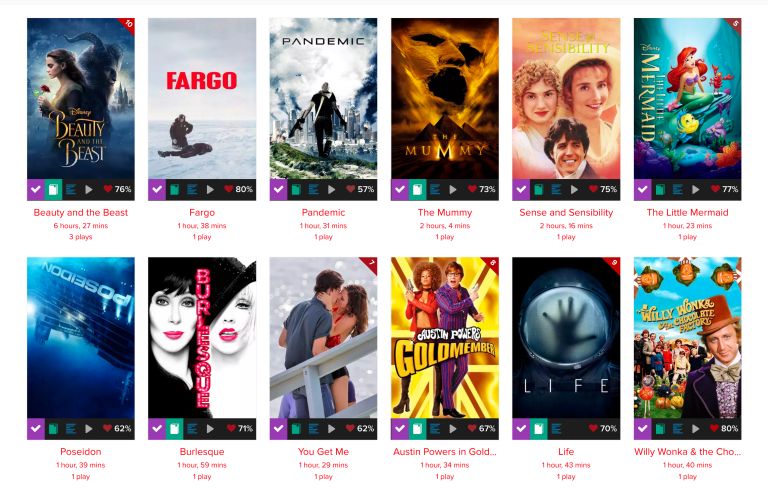 So last month I watched a total of 38 movies, with my most played film being by far “Beauty and The Beast” which was finally released to DVD/Blu-Ray last month. I loved seeing the film at the cinema back in March, but it shows that I loved it as I have now watched it 3 more times this past month alone, although two times I was with friends when I did. It’s a great live action adaption of the 1991 animated classic and it will go in there as one of my favourite films of all time, love it!

The summer is well and truly here and because of the heat we experienced here in the UK last month I haven’t been watching as much TV as I did previously. All of the other films in my Top 12 have only been played 1 time. I did subscribe to Amazon Prime this month though so I have been delving into their catalogue of movies and TV Shows to see what was on offer, and it was really good to watch “Willy Wonka and The Chocolate Factory” again after seeing the musical adapted from this film last year for my birthday.

Other notable films I have watched include “Life” which is a pretty gruesome and scary film about aliens, honestly, you need to go and check it out, as long as your stomach can hold it the way through. I also bought the original “The Mummy” trilogy on Ultra HD Blu-Ray so I watched the first in the series the other day too. I was meant to be seeing the remake in cinemas earlier this month but didn’t in the end, I am kinda glad I didn’t though as I have heard nothing but bad reviews on the remake. The original will always be best!

So as I mentioned earlier, the heat last month has meant that I have wanted to spend less time in front of the TV and wanting to remain cool instead. That being said, I did ensure that “Orange Is The New Black” – the newly released Season 5 on Netflix, has been watched in its entirety. Me and my friend literally spent two whole days watching the 13 episodes, we were left on cliffhangers at the end of each episode and you can’t help but want to keep watching more to find out what happened. The season finale was also a big cliffhanger, I won’t spoil it if anyone is about to watch it but it looks like Season 6 is going to completely different to the rest. I absolutely love the show and cannot wait for it to come back to Netflix next June!

My most watched TV Show was in fact “Friends”, which goes to show how easy it is to just put it on and keep watching, you don’t get bored and with each episode clocking in at 22 minutes you aren’t watching the whole time. You may notice that even though “Friends” had the most plays last month, “Orange Is The New Black” clocked in 13 hours worth of watches, which is much more than “Friends”‘ 7 hours.

Other TV Shows I watched last month included the Season finale of “RuPaul’s Drag Race” Season 9, what a great season it was this year. I have also been watching more of “Inside Amy Schumer” who is hilarious and is really on my wavelength humour wise. I have also only just started watching a new show on Netflix called “Glow” which looks at 80’s in its cult form, a show based on a group of girls who take part in an 80’s TV Series about wrestling. It sounds weird but it is actually strangely appealing and you can’t help but want to watch more, I also love the music being featured in it too.

“Game Of Thrones”: Season 7 is going to be unleashed later this month and this means that it is the perfect time for me to catch up on Seasons 1-6. Yes, I admit to never really watching the show before now, but if I am going to write blogs about good TV then I need to start watching it myself. This month I will be setting myself the challenge of watching as many Game Of Thrones episodes as possible, which will hopefully lead me up to Season 7. I have watched a couple of episodes before now but as I was only casually watching and not paying full attention, it didn’t really entertain me. I will be changing that stance this time though and making sure that I am fully focused. Will Game Of Thrones be my most watched TV Show next month? We’ll see.

Just as a final little feature, every month at the end of this blog I will post this widget which will show you the very last episode or movie that I have watched in real time, neat huh?