Talking of new logos, here is the brand new logo for my brand new series of blogs: Flix of the Month (abbreviated to FOTM). As of the 1st April, I will be publishing my new blog which will look back at the previous month of TV Shows and Movies and seeing what I watched the most. All of the stats will be taken from my Trakt.tv profile which you can view by clicking here.

In my previous personal blog in February I was pondering the idea of blogging about what I watch, as well as what I listen to. My MOTM blogs have been going on for a few years now but there is nothing to look back at what I am watching, until now. With the discovery of the fantastic site, trakt.tv, I can now look at in-depth stats of the Movies and TV Shows that I am watching, and it even breaks it down into genres, actors, popularity, ratings and even directors. I am so excited to get started on this new series for you and to give you a taster of what to expect, here is my most watched TV Shows of February… 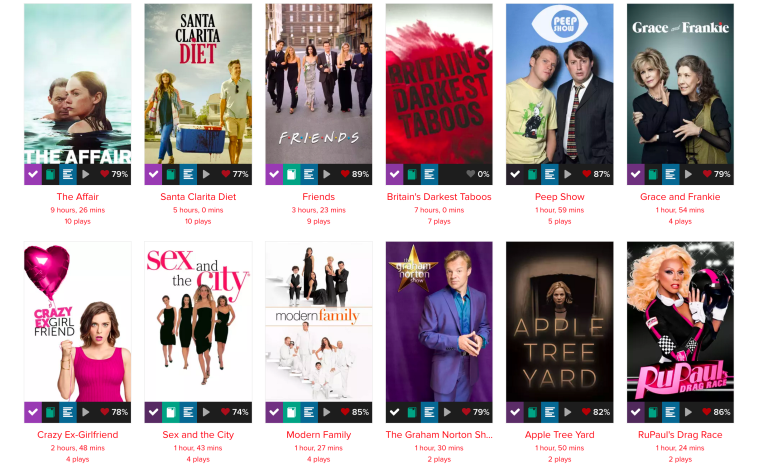 and my most watched Movies of February 2017…

**You can click the images to bring up the full page**

So just a few things to point out really, most watched is based on how many times I have watched a certain episode of a TV Show or Movie and then also the length of the episode or movie too. For example, I have only watched Pirates of the Caribbean (the first movie) once but because it’s length is 2 hours, 23 minutes it takes the #1 spot of the most watched. TV Shows is based on how many episodes I have watched but because this month there would have been a tie (Santa Clarita Diet and The Affair), in this case, the most watched would be The Affair because the episodes are longer. According to my stats, I spent 9 hours, 26 minutes of my time last month watching The Affair, I was hooked all the way through Season 3 and watched it all in one go.

In my next blog, it won’t be just about what my most watched was but will also go into more detail about what I think of certain shows and movies and act a bit like my ratings. You will see on the movies that there are numbers in the upper right corner, this is my rating of the film out of 10. The higher the number, the more I loved watching it.

As you can see, “Bridget Jones’ Baby” was my highest rated movie of last month with a 10-star rating. I absolutely loved the film and thought it was a great addition to the series of films. I thought the film was brilliantly funny and the timing was great, although my only criticism would be that I didn’t want that particular ending. I also got round to watching “The Girl On The Train” last month and thought it was really good. I did get a bit bored in the beginning but by the end, I was absolutely hooked and was not expecting that twist either. Have you seen any of these movies?

just a quick note on the TV Shows I have been watching, I have really enjoyed watching “The Affair” as you know which has been on Sky Atlantic here in the UK, and I caught up with Season 3 this month. I have also loved the new Drew Barrymore fronted “Santa Clarita Diet” which was released on Netflix last month. I did think that the ending was rushed and I am sure all of my questions about the ending will be answered in Season 2, but I did think it could have gone on for a couple more episodes at the end.

I have also been watching “Britain’s Darkest Taboos” which I found whilst stumbling around on Netflix. Don’t judge me, but basically, the show is an in-depth look at some of the most gruesome murders here in the UK and goes into depth about what serial killers did. I started out by watching one episode and thinking what is this, but it does grip you and it does make you think that there are some horrible, sick people out there. If you can catch the show, make sure you do as it is very interesting how in-depth it gets.

Anyway, don’t forget to join me on April 1st for my first official “FOTM” (Flix of the Month) blog where we can go through some new movies and TV Shows that I have been watching. My question is, any recommendations?