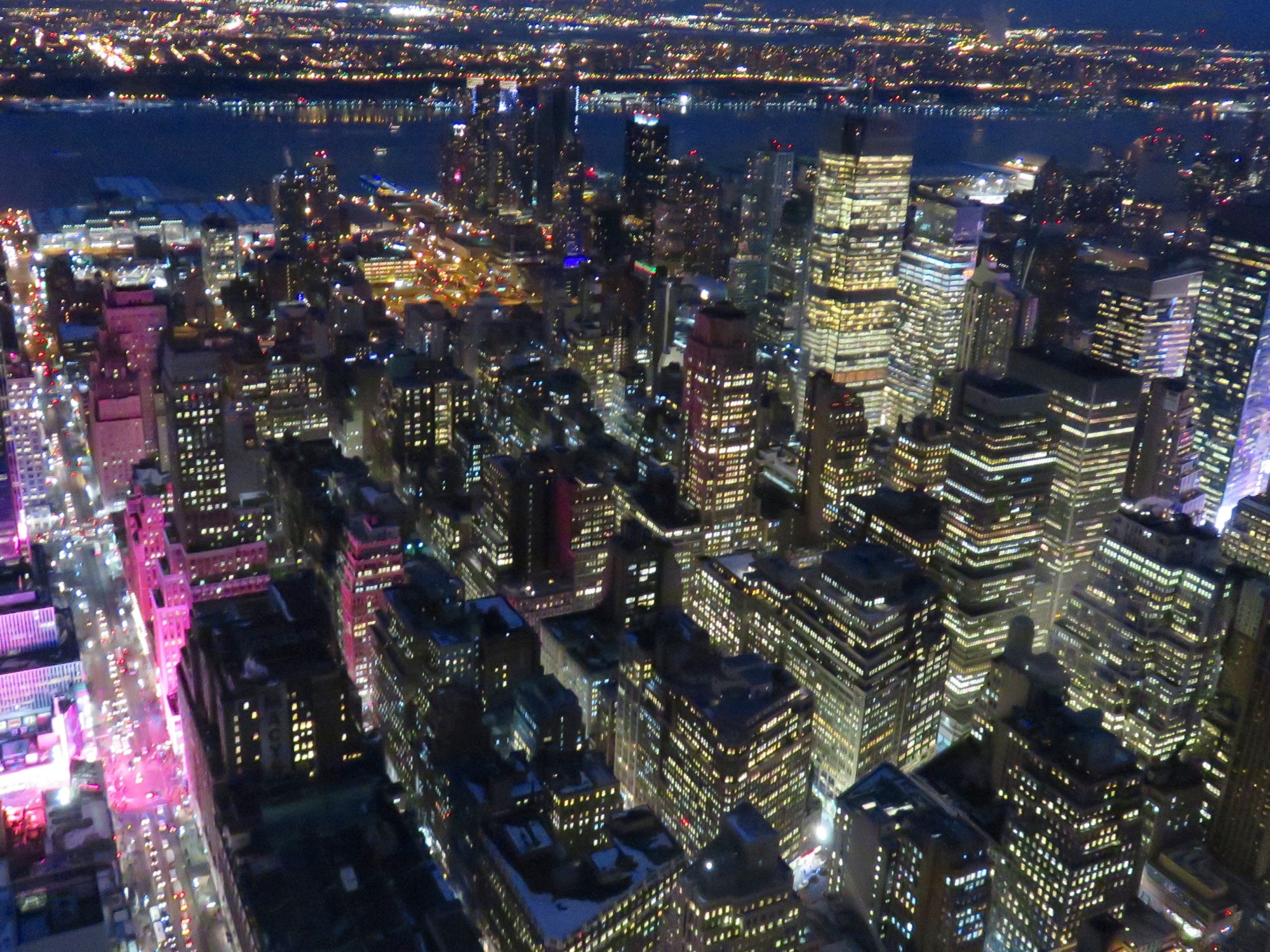 So I am currently sitting in seat 66A on my Virgin Atlantic flight to Newark Airport and can’t help but think how amazing it is going to be to hit New York again, although this time in style.

You see, I first visited New York back in February 2006 (which feels like a lifetime ago now) on a college trip with a few friends. Even though the trip was great fun, it was restricted and came with a curfew which as an 18 year old I really did not appreciate.

This time I am determined to do things differently, I want to see all of the big attractions again, see a show on Broadway and do some SHOPPING!!

So I am going to break my blog up in to bits and do a day by day account of all the goings on. Happy reading.

So after waiting over an hour to pass through immigration, we got our pre-booked transfer to the hotel. We were greeted by the sound of tons and tons of police cars and fire engines. We had no idea what was going on but whatever it was, it must have been pretty big.

Times Square was the only thing on the agenda and so headed there to see the sights and in the process got very cold, very quickly.

So, the first full day in New York is upon us. Today was all about seeing what Downtown has to offer. I think today is even colder than yesterday and the wind chill really gets you. Speaking to one native New Yorker, they said that this is one of the worst winters ever.

So on today’s agenda, we visited the Rockefeller Centre, Madison Square Gardens, Empire State Building and the shops down 5th Avenue. There was a lot of walking involved and sitting here in bed writing this I can tell you that my feet feel so knackered. A long rest in bed is needed but I feel that tomorrow is going to be just as full on. 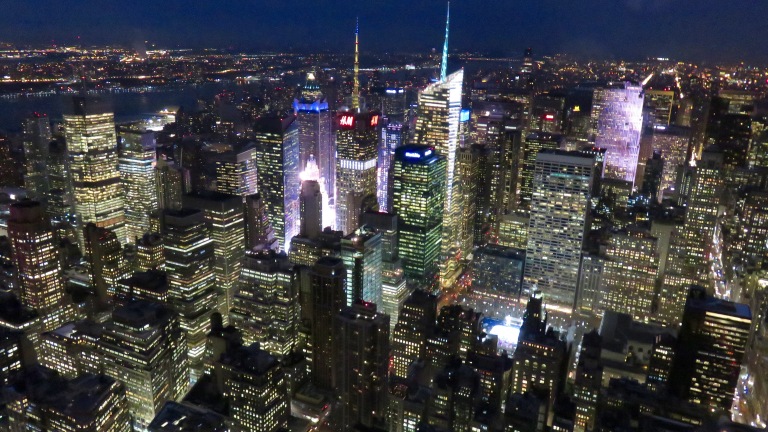 So Day three is upon us and today is all about making our way down south towards Battery Park. From there, we will be catching a ferry to head towards both Liberty Island and Ellis Island. Of course, this is where Lady Liberty herself resides. It was great seeing the Statue of Liberty up close again but I have never felt so cold. In fact, I think I have started to get a cold.

After this we headed to the 9/11 memorial which was sad to see. It’s great that they have a fantastic memorial but seeing the two holes in the ground makes it so real and sad. We also visited the Tribute centre which held a few artefacts from that day and the stories behind them.

We still also found time to head to Madame Tussauds which was a heap of fun. Some of the waxworks looked very life like (some didn’t) and I like how they did a different theme on each floor. My favourite being the music superstars floor of course.

Ah, now I am knackered. My poor feet are starting to kill me. Needless to say I got my energy together and headed to the Intrepid museum which is all set out on an old warship. Here is also where the old Space Shuttle Enterprise is also kept. You know, the one that flew on top of a Boeing 747 to get here.

We then went on the TV & Movie sights tour which if I am honest I was very disappointed with. Everything was rushed by and we didn’t get to visit some of the good sites like the Friends apartment building or the Ghostbusters fire station that was converted for the films. Oh well, it was good to get out of the bitter cold for 90 minutes.

We are now queueing up to see Jersey Boys at the August Wilson theatre. This musical has had rave reviews so I am excited to se what it is al about. I have not got much knowledge on the history of Frankie Valli and the Four Seasons so will see how this all plays down. 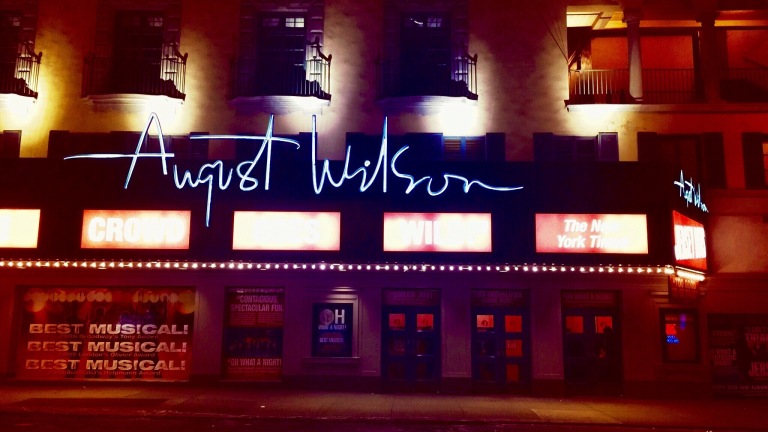 It’s time to conquer Central Park. One place on earth I still haven’t been to, even though this is my second trip to fabulous New York. It may be bitter cold but nothing is going to stop me getting there and seeing the sights.

Turns out it was cold, very very cold. It also started snowing heavily whilst we were there, we couldn’t get to the nearest Starbucks fast enough to warm up. It was great seeing some of the best movie locations in real life though and managed to get a lot of pictures.

It was then time to start heading back to our hotel to be collected for our return journey back to the airport. This trip has gone way too fast. I really hope to go back to New York again, although next time it would be great to see it in the summer months.

OK, so this technically isn’t a day in New York but I thought it would be worth a mention as it was so dramatic and frustrating and makes for a good read.

So we got to the airport, ready to fly back home. It was snowing but we were told that this wasn’t going to impact on our flight home. Everything was going well, it seemed.

We got to our departure gate in Newark airport when we saw a rogue airplane sitting in our gate. I say rogue as it turned out it was not meant to be there and was left from earlier due to some cargo issue. Our departure time was meant to have been 20:30, yet that plane was still there at 20:05. It did get moved though, and then we were told we would have to wait for our plane to make it’s way to the gate to board.

So this all happened rather quickly, there would be a tiny delay if that we thought. The plane arrived, the crew got on board and then shortly afterwards they got all of the passengers on board. The flight in itself I should point out, was full of empty seats and so not many people needed to be boarded.

We got on board, got comfy in our seats and then there was an announcement that the plane needed to be de-iced and then had anti-freeze put on to allow better airflow over the wings on takeoff. We were initially told of about 30-45 minutes delay, and then later just over an hour. OK, we thought, this is for our own safety. We would be delayed but not that much and it’s better to be safe than sorry, right?

Right, so we waited and waited. We then eventually got the all clear from the captain that we were going to start taxi-ing on to the runway for takeoff. This is when the drama really unfolded. A few seats up in economy, some female was very intoxicated and became verbally abusive to both the crew and another passenger. We were told by the captain that we would have to return back to the gate to deal with this. We went back to the gate, police came on board and arrested the woman and also took evidence and statements from the victims in this scenario. We then had to wait whilst one baggage handler came in to the checked baggage area to locate her suitcase. This delayed things further by at least another hour.

By this time, we were tired, delirious and just wanting to get home. Luckily, we did just that. We took off with no problems and before we knew it we were about to land in to Heathrow airport, albeit approximately 4 hours late.

We got through the UK Border control with ease, and were ready to go home. We went to our baggage carousel waiting to see our luggage to collect when suddenly the carousel breaks down and stops. I can tell you that for about 30 minutes we were all just standing there waiting, with no announcements at all. We then got informed that there was a “blockage” and that they were working on it. Another 20 minutes later and the carousel started spinning again, but then stopped. At this point, people (including myself) got very irate as this was just not good enough after the night we had just gone through. I ended up getting in to a Twitter argument with Heathrow Airport as they said to me it’s the airlines fault, when they’ve openly said twice that it is in fact a blockage with their machinery. What a farce I thought.

Throughout it all, and the moral of this story is this. Our airline was Virgin Atlantic and I have never had a problem with them in the past. Everything that happened on this disastrous night, they kept us updated and explained everything and actually made us feel better about it all. This just goes to show why they really are the best airline to fly with.

To anyone who was on the same flight as us and remembers this incident, I hope you all managed to get home safe and sound.

I wonder where my next trip will take me…

There was an error retrieving images from Instagram. An attempt will be remade in a few minutes.